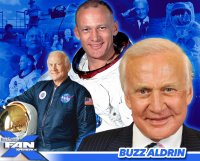 Edwin Eugene Aldrin Jr., known as Buzz Aldrin, is an American engineer, fighter pilot and former astronaut. He is a real American hero and the second person to walk on the Moon. He was the Lunar Module Pilot on Apollo 11, the first manned lunar landing in history. He set foot on the Moon at 03:15:16 on July 21, 1969 (UTC), following mission commander Neil Armstrong. He is a former U.S. Air Force officer and a Command Pilot. He graduated 3rd in his class from West Point in 1951 and later went to graduate school at MIT.

Colonel Aldrin has written many books about space exploration including Return to Earth, Men from Earth, Reaching the Moon, Look to the Stars, Magnificent Desolation and Welcome to Mars.

Aldrin has appeared as himself on film, television and video game projects, such as: The Boy in the Plastic Bubble, The Simpsons, Space Ghost Coast to Coast, Numb3rs, 30 Rock, Dancing with the Stars, Transformers: Dark of the Moon, Futurama, The Big Bang Theory, and Mass Effect 3.

Buzz Aldrin will be the Guest of Honor at the Buzz Aldrin “Mission to Mars” Ultimate FanXperience! Click HERE to learn more about this once-in-a-lifetime event and get your tickets. Be sure to join our Buzz Aldrin Panel Scholarship (sponsored by Siegfried & Jensen) or our Meet an Astronaut Contest (K-12) for a chance to win free tickets to the event.