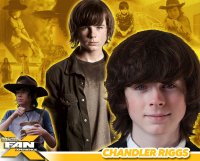 Chandler Riggs is an American actor best known for his role as Carl Grimes on the television series The Walking Dead.

In 2009 at age nine, Riggs got his first two major acting breaks simultaneously, as Tom in the film Get Low and a role in the television movie The Wronged Man. At age 10, Riggs was cast as Carl Grimes on the The Walking Dead, an AMC zombie drama television series. The series is the highest rated in cable television history and has smashed all previous ratings records.

In 2012 and 2013, Riggs was nominated for the Young Artist Award for Best Leading Young Actor for his role on the show, and won the award in 2014 along with a Saturn Award.