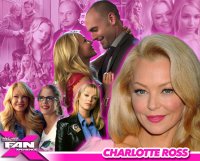 Charlotte Ross is an American actress, best known for her roles as Eve Donovan on the NBC Daytime soap opera Days of Our Lives from 1987 to 1991, as Det. Connie McDowell on the ABC police drama series NYPD Blue from 2001 to 2004, Judy Fabray in Fox comedy-drama series Glee and Donna Smoak in hit superhero series Arrow.

Ross’s run on Days of Our Lives lasted from 1987 to 1991, earning her two Emmy nominations. Her other television credits include the musical drama series The Heights (where she sang on the Billboard Number One hit “How Do You Talk to an Angel”), The 5 Mrs. Buchanans, Drexell’s Class, Pauly, Law & Order, Trinity, Beggars and Choosers, Frasier, Savage Land, Jake in Progress, Fall Into Darkness and A Kiss So Deadly (which reunited her with Days co-star Charles Shaughnessy).

Ross is also known for her role as Connie McDowell in the ABC police drama series NYPD Blue from 2001 to 2004. In 2009, Ross began a recurring role on the Fox comedy-drama series Glee as Judy Fabray, the mother of Quinn Fabray (Dianna Agron). Ross made a guest appearance on the ABC musical drama series Nashville. Later that year she was cast as Felicity Smoak’s mother in The CW series, Arrow.