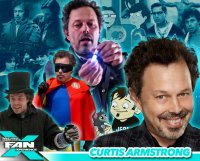 Curtis Armstrong is an American actor known for his portrayal as Booger in the Revenge of the Nerds films, as Herbert Viola on Moonlighting, as Miles Dalby in Risky Business, as famed record producer Ahmet Ertegün in the film Ray and for voicing the titular character in the show Dan Vs. He is also the co-host of the TBS reality television competition series King of the Nerds, in addition to the role of Metatron in the series Supernatural.

His first role came in the 1983 hit film Risky Business. However, he is probably best known for his role of Booger in Revenge of the Nerds and its sequels. His other films include Better Off Dead, Big Bully, One Crazy Summer, Bad Medicine, National Lampoon’s Van Wilder, Smokin’ Aces, DodgeBall: A True Underdog Story, Jingle All The Way, Southland Tales, and Beer for My Horses. He also had a recurring role as Herbert Viola on the television series Moonlighting, and played the part of Ahmet Ertegün in the biographical film Ray (2004).

He voices “Snot” on the animated sitcom American Dad!, parodying his role from Revenge of the Nerds. In May 2013, Armstrong appeared as Dr. Foster in an episode of New Girl. He continues to play the angel Metatron in several episodes in the 9th and 10th seasons of Supernatural. In 2010 he began voicing the main character on the animated series Dan Vs. He also voices Robot in Robot and Monster. In 2011, he appeared on an episode of Curb Your Enthusiasm, and has a recurring role as attorney Peter Goldman on season seven of The Closer.

Armstrong and former Revenge of the Nerds co-star Robert Carradine host the TBS reality TV competition series King of the Nerds. The series, which pits contestants with expertise in a variety of geek interests to see who will be crowned with the eponymous title, premiered in January 2013.