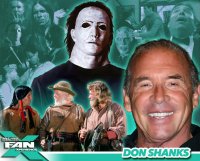 Donald L. “Don” Shanks (born February 26, 1950) is an American actor and stuntman, known for his role as Michael Myers in Halloween 5: The Revenge of Michael Myers, and Nakoma, the Native American friend of the title character in the 1977 television series The Life and Times of Grizzly Adams.

In 1989, Shanks portrayed Michael Myers in Halloween 5: The Revenge of Michael Myers. In 2006, he appeared as Ben Willis, the infamous serial killer in the film I’ll Always Know What You Did Last Summer. In 2007, Shanks, who is of Cherokee and Choctaw descent, appeared in the film The Last Sin Eater as a Native American chief. Recently, Shanks appeared in the horror film Smothered, directed by John Schneider. The movie stars Shanks, Kane Hodder, Bill Moseley, R. A. Mihailoff, and Malcolm Danare as several horror icons that find themselves the focus of a murderous hunt at a horror convention.