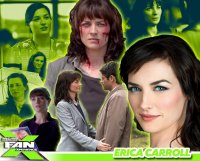 Erica Carroll is a British Columbian actress. On TV, she played the character Mrs. Rivera on the series Almost Human, Inza Nelson in Smallville and a recurring role as Hannah on Supernatural. She has acted in movies such as Apollo 18 and Pressed, as well as acting and producing Afterparty.

Erica’s favourite television programs in her teen years were Saturday Night Live and Star Trek: The Next Generation. In middle school she practiced her love of characters and sketch comedy with a friend’s home camera and was inspired by the concepts introduced by the writers of TNG. Moving to Vancouver Erica gradually built her resume with many film and television roles. She has played roles on a number of Sci-fi series and films such as Apollo 18, Battlestar Galactica, Caprica, Fringe, Smallville, Almost Human, Alcatraz, V (where she was delighted to be directed by Jonathan Frakes of TNG), and Supernatural; joining the series in its first year and returning for the role of Hannah, a recurring guest star character, in the 9th and 10th season. Erica also appeared in the second season of When Calls the Heart, a Hallmark original series.

Erica received a Leo nomination for her performance in the short film When Jesse Was Born. That same role nabbed her a Best Female Performance award at the Sacramento Film Festival. One of her latest features, Afterparty, premiered at last year’s Whistler Film Festival to critical praise. When she’s not acting, Erica can be found mentoring up and coming young talent, advocating safe technology, or taking care of her Bullmastiff. A true animal lover, Erica supports the SPCA and the Vancouver Humane Society.