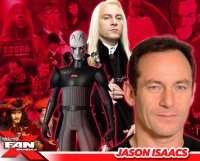 Jason Isaacs is an English actor and voice actor, best known for his performance as Lucius Malfoy in the Harry Potter films, the brutal Colonel William Tavington in The Patriot and as lifelong criminal Michael Caffee in the American television series Brotherhood.

His first Hollywood role was alongside Laurence Fishburne in the film Event Horizon in 1997 and subsequently appeared in the Bruce Willis blockbuster Armageddon (1998). He then shone as “memorable” villain, Colonel William Tavington, in Roland Emmerich’s American Revolutionary War fictional film epic The Patriot (2000). Isaacs has appeared in many other films, most notably as Lucius Malfoy in the Harry Potter series of films (2002–2011).

He has appeared in Dragonheart (1996), Black Hawk Down (2001), Jackie Chan’s The Tuxedo (2002) and as George Darling and Captain Hook in P.J. Hogan’s adaptation of Peter Pan (2003) and as the voice of Admiral Zhao in the animated Nickelodeon series Avatar: The Last Airbender and The Legend of Korra. On American television, Isaacs appeared in three episodes of The West Wing in 2004, prior to developing his most notable TV serial role, as Michael Caffee in Brotherhood (2006–08). He provided the voice of Ra’s al Ghul in the 2010 DC animated film, Batman: Under the Red Hood and also the voice of Sinestro in the 2011 DC animated film Green Lantern: Emerald Knights.