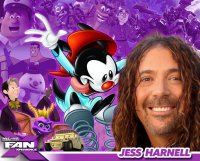 Named by the entertainment industry’s Variety magazine as one of the top ten voice actors in the business, the Emmy-nominated Jess Harnell is truly one of the best and busiest. “If I wasn’t getting paid for this, I’d be doing it for free in a parking lot somewhere.” Born on the east coast and moving to California when he was ten, Jess always knew he’d end up as a performer- though not necessarily as a cartoon!

Jess has appeared on practically every animated series on TV from “The Simpsons” to “Fairly Odd Parents” to” Phineas & Ferb.” In addition, he has dozens of starring roles, including “Captain Hero” on Comedy Central’s “Drawn Together”, Chilly and The Wicked King on “Doc McStuffins”, “Cedric” on “Sofia The First” and “Wakko” on Steven Spielberg’s “Animaniacs”, winner of multiple Emmy awards including Best Animated Series and the prestigious Peabody Award.

Jess’s voice has been heard on countless popular prime time television series from “The Practice” to “Buffy the Vampire Slayer” to “Chuck” and announcing shows such as “America’s Funniest Home Videos” and E! TV’s hit series “Celebrities Uncensored,” which Jess essentially hosted. Jess has an extensive background as a rock singer winning numerous Best Singer awards and doing literally thousands of gigs as a studio vocalist and sound-alike, impersonating many famous vocalists flawlessly. In fact, Jess is currently the lead singer in the acclaimed 80’s metal/pop mash-up band “Rock Sugar”, sharing stages with such rock legends as AC/DC, Slash and Aerosmith.

Just a few of Jess’s film credits include “Finding Nemo,” “The Country Bears,” the “Toy Story” franchise, and “Up” as well as being the only voice actor to voice two major characters in the “Transformers” films. Additionally, Jess has voiced thousands of promos and has many national commercial credits for clients such as Disney, McDonalds, Diet Coke, Fox, Kellogg’s and a series of spots for Sea World as the voices of both Shamu and Shamu Jr. Jess is the first to admit that he has an unusual and very interesting career, “I knew that I had a weird occupation when my mom asked me what I did one particular day at work and I told her I’d been playing a ‘devil dog from hell.’ She replied, ‘Well, that’s nice. How’s everything else going?’”

One of the top celebrity voice matches in the business, Jess perfectly mimics over 150 celebrities- both speaking and singing- from Arnold Schwarzenegger to Ozzy Osbourne, Elvis Presley to all four Beatles, Albert Brooks To Christopher Walken, Steve Perry to Willie Nelson and Pee Wee Herman to Rodney Dangerfield. “If it’s related at all to the voice, I’d like to believe I can do it. And if I can’t, I’ll work on it until I figure out a way that I can.”