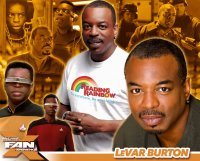 LeVar Burton is an American actor, voice actor, presenter, director, producer, and author. He is best known for his roles as Lt. Commander Geordi La Forge in Star Trek: The Next Generation series and films, the young Kunta Kinte in the 1977 award-winning ABC television miniseries Roots and as the host and executive producer of the long-running PBS children’s series Reading Rainbow. He has also directed a number of television episodes.

LeVar Burton made his acting debut in 1977 when he played Kunta Kinte in the ABC award-winning drama series Roots, based on the novel by Alex Haley. Burton’s audition for the role of Kinte was the first of his professional career. As a result of his performance, he was nominated for the Emmy for Best Actor in a Drama Series.

Burton was host and executive producer of Reading Rainbow starting in 1983 for PBS. The series ran for 23 seasons, making it one of the longest running children’s programs on the network. Furthermore, the series garnered over 200 broadcast awards over its run, including a Peabody Award and 26 Emmy Awards, 11 of which were in the “Outstanding Children’s Series” category. Burton himself won 12 Emmy awards as host and producer of the show.

Burton has also lent his voice to several animated projects including Kwame in the cartoon series Captain Planet and the Planeteers (1990–1993) and The New Adventures of Captain Planet (1993–1996), Family Guy, Batman: The Animated Series, and Gargoyles.