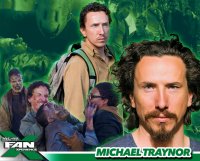 Michael Traynor is an American actor and writer who portrays Nicholas in AMC’s The Walking Dead. Nicholas first appears in Season 5 of AMC’s The Walking Dead and is a survivor of the outbreak. He is a resident of the Alexandria Safe-Zone and is its prominent supply runner, alongside Aiden Monroe. Traynor is also known for roles in Homefront (2013), A Perfect Getaway (2009) and Smiley (2012).