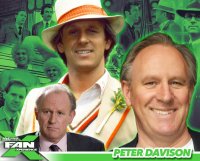 Peter Davison is an English actor, best known for his roles as the fifth incarnation of the Doctor in Doctor Who, which he played from 1981 to 1984 and as Tristan Farnon in the television version of James Herriot’s All Creatures Great and Small. He played David Braithwaite in At Home with the Braithwaites and since 2011 he has played Henry Sharpe in Law & Order: UK.

In 1980, Davison signed a contract to play the Doctor for three years, succeeding Tom Baker (the Fourth Doctor) and, at age 29, was at the time the youngest actor to have played the lead role, a record he retained for nearly thirty years until Matt Smith (the Eleventh Doctor) took the role in 2009 at age 26. The Fifth Doctor encountered many of the Doctor’s best-known adversaries, including the Daleks (in Resurrection of the Daleks) and the Cybermen (in Earthshock).

After leaving Doctor Who, Davison would come back to the franchise on a few occasions. He presented the special videotape documentary release Daleks – The Early Years (1993), showcasing selected episodes of missing Dalek stories from both the First Doctor and Second Doctor’s eras. Davison did, in fact, return to play the Fifth Doctor in the 1993 multi-doctor charity special Dimensions in Time and in the 1997 video game Destiny of the Doctors (audio only).

In November 2010, it was announced that Davison would be joining the regular cast of the UK version of Law and Order as Henry Sharpe, the Director of the London Crown Prosecution Service (CPS). Davison’s appeared from the beginning of the series’ fifth season, alongside fellow Doctor Who actress Freema Agyeman.