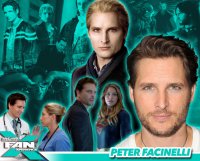 Peter Facinelli is an American actor and producer best known for playing Dr. Carlisle Cullen in the film adaptations of the Twilight novel series, and is also known for his role as Mike Dexter in the 1998 film Can’t Hardly Wait. Facinelli was a regular on the Showtime comedy-drama series Nurse Jackie, portraying the role of Dr. Fitch “Coop” Cooper and currently plays Maxwell Lord on CBS’ superhero series Supergirl.

Facinelli made his feature film debut in Rebecca Miller’s Angela in 1995 and came to the attention of critics in the TV-movie The Price of Love later that year. In 1996, Facinelli played opposite his then-future wife Jennie Garth in An Unfinished Affair. Other TV roles followed, including a part in After Jimmy (1996) and a college dropout in Calm at Sunset. Facinelli co-starred with Amanda Peet and Michael Vartan in the 1997 AIDS-themed drama Touch Me (1997) and co-starred as a high school student in two 1998 features with Ethan Embry and Breckin Meyer, Dancer, Texas Pop. 81, and Can’t Hardly Wait, which starred Jennifer Love Hewitt.

Facinelli appeared in the sci-fi film Supernova starring James Spader in 2000. He made appearances in Riding in Cars with Boys in 2001 and The Scorpion King in 2002, followed by a leading role in the Fox drama Fastlane. Facinelli had a recurring role in the HBO series Six Feet Under in 2004 and a role in the FX original series Damages beginning in 2007.