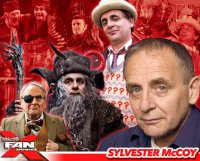 Sylvester McCoy is a Scottish actor, best known for playing the seventh incarnation of the Doctor in the long-running science fiction television series Doctor Who from 1987 to 1989 – the final Doctor of the original run – and briefly returning in a television film in 1996 and for his role as the wizard Radagast the Brown in Peter Jackson’s film adaptations of The Hobbit.

Notable television appearances before he gained the role of the Doctor included roles in Vision On, Jigsaw and Tiswas. He also appeared in Eureka, often suffering from the inventions of Wilf Lunn and as Wart, assistant to StarStrider in the CITV series of the same name. McCoy also had a small role in the 1979 film Dracula opposite Laurence Olivier and Donald Pleasence, and has sung with the Welsh National Opera.

McCoy became the Seventh Doctor after taking over the lead role in Doctor Who in 1987 from Colin Baker. He remained on the series until it ended in 1989, ending with “Survival”. He played the Doctor in the 1993 charity special Dimensions in Time, and again in 1996, appearing in the beginning of the Doctor Who television movie starring Paul McGann as the Eighth Doctor. McCoy joined Peter’s Jackson’s The Hobbit, a three-part adaptation of the book, in 2011. He portrayed the wizard Radagast, alongside fellow King Lear actor Ian McKellen who reprised his role as Gandalf.