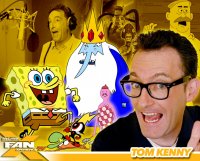 Tom Kenny is an American actor and comedian, best known for his long-running role as the title character in the SpongeBob SquarePants TV series and films. Kenny has voiced many other characters including Heffer Wolfe in Rocko’s Modern Life, the Ice King in Adventure Time, the Mayor in The Powerpuff Girls, Dog in CatDog, and Spyro from the Spyro the Dragon franchise. His live-action work includes comedies The Edge and Mr. Show. Kenny has received the Annie Award twice for his roles in SpongeBob SquarePants and Adventure Time.