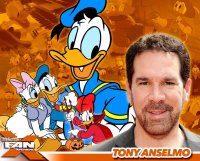 Anthony “Tony” Anselmo is an American voice actor and cartoon animator. Since 1985, he has been the current voice of Donald Duck. Anselmo was trained by the original voice of Donald, Clarence Nash, spending three years as his understudy. He first voiced Donald on a 1986 D-TV Valentine special on The Disney Channel.

Anselmo has also shared voice-over duties (with Russi Taylor) for Huey, Dewey, and Louie since 1999. He has voiced the nephews on Mickey Mouse Works and House of Mouse (while Taylor voiced the nephews in DuckTales, Mickey’s Once and Twice Upon a Christmas, Mickey’s Speedway USA and the remastered DuckTales video game in 2013.) He also lent his voice to minor characters in The Great Mouse Detective, Mickey’s Around the World in 80 Days and Phineas and Ferb.

Anselmo has also worked as a voice actor for the Kingdom Hearts series, which features Donald Duck as one of three main characters. He also provided the voice of Donald in the video game Kinect Disneyland Adventures in 2011. As an animator, Anselmo has worked on such Disney theatrical films as The Black Cauldron, The Little Mermaid, Beauty and the Beast, The Lion King, Tarzan and The Emperor’s New Groove. In September 2009, Tony Anselmo was named a Disney Legend.