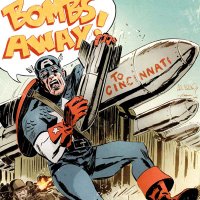 Golden Age Legend Allen Bellman is best known for his work with Timely / Marvel in the 1940′s-1950′s on titles and characters such as Captain America, The Patriot, The Destroyer, The Human Torch, Jap Buster Johnson, Jet Dixon of the Space Squadron, All Winners Comics, Marvel Mystery Comics, Sub Mariner Comics, Young Allies, Vampire Brats, Suspense and so much more. He created the back-up crime feature Let’s Play Detective and also contributed to pre-Code horror, crime, war and western tales for Atlas. In the 50′s Allen also did work for Lev Gleason.

Mr. Bellman started working for Timely (Marvel) Comics in 1942 and was a mainstay during the Golden Age of comics until 1954. He started his career doing backgrounds for Captain America before joining the Timely staff as a full time artist. Mr. Bellman is full of amazing stories from the Golden Age, which he loves to speak with fans about. He is one of the few remaining pioneers of the comic book industry and to hear him speak about Timely in the 1940′s, working with the likes of Stan Lee, Syd Shores, Mike Sekowsky and the rest of the bullpen is a rare treat. Not only does Mr. Bellman love to speak about his work, he continues to draw to this day. He recently created a new Let’s Play Detective strip for 3 Boys Productions, program guide covers for a recent convention in Ohio and covers for the 2011, 2012 and 2013 Florida Supercon program guides.

Allen Bellman will be appearing Thursday, Friday, Saturday and Sunday. He will be located at Booth # 502 in the exhibition room.