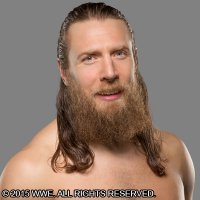 WWE® Superstar Daniel Bryan® will be appearing on Saturday, June 27. He will be signing autographs and taking part in professional photo ops. There is a fee of $40 per Autograph and $40 for professional photo ops (8x10 photos printed on site). He will take part in a Q&A with fans on the main stage. PRE-ORDER your autographs and photo ops at https://register.growtix.com/e/florida_supercon_2015/479. As well, WWE® Superstar Daniel Bryan® will be taking part in a special limited “V.I.P. EXPERIENCE” on Saturday from 11:00am-12:00pm, tickets are available for that event at https://register.growtix.com/e/florida_supercon_2015/479.

Trained by WWE Hall of Famer Shawn Michaels, Daniel Bryan competed on the indy wrestling circuit for more than 10 years. Honing his craft on multiple continents, he became well-known for his hybrid of Japanese and American offensive styles that made good use of vicious elbow strikes, precise kicks, spine-jarring suplexes and various torturous submission maneuvers like the “Yes!” Lock, formerly named after martial arts specialist Gene LeBell.

First coming to WWE as part of the inaugural season of WWE NXT, Bryan soon made it clear he was destined for great things.

After shaking the drama of The Nexus — which formed out of WWE NXT season one contestants — he refocused his efforts on a solo career, exciting the WWE Universe with his unique in-ring style and bone-snapping artillery.

Eventually, the determined Superstar’s efforts came full circle, when he enjoyed his first taste of title gold in WWE from then-United States Champion The Miz, his former NXT Pro. In summer 2011, Bryan won the Money in the Bank Ladder Match, which soon propelled the skilled grappler to the World Heavyweight Championship. After Bryan cashed in at WWE TLC 2011, the weightier prize around his waist wasn’t the only difference in the typically humble competitor; his newfound arrogance distanced him from the WWE Universe that once pulled for the underdog.

Upon losing the World Heavyweight Title at WrestleMania XXVIII in only 18 seconds, the former champion’s increasingly erratic behavior forced him into an unlikely pairing with Kane. The odd couple, dubbed Team Hell No by the WWE Universe, won the WWE Tag Team Championship, which they held onto for eight months. Their loss contributed to the crumbling of their partnership, with Bryan insisting that Kane believed he was the “weak link” in their team. The former World Heavyweight Champion caught fire, going on tirades in and out the ring, and John Cena selected Bryan to challenge him for the WWE Title at 2013’s SummerSlam.

While defeating Cena at the event was the highpoint of Bryan’s career up to that point, he also suffered his greatest defeat. Moments into the new champion’s celebration, Randy Orton cashed in his Money in the Bank contract and — with a shocking assist from special guest referee Triple H — successfully claimed the WWE Title for himself. In December, Bryan cleaned up at the 2013 Slammy Awards, including winning Superstar of the Year. He rebelled against The Authority by leading a “Yes!” Movement through the WWE Universe that brought him to a triumphant victory in the main event of WrestleMania 30, becoming the second-ever WWE World Heavyweight Champion.

The celebration would prove to be short-lived. Returning from his honeymoon after marrying WWE Diva Brie Bella, Bryan would discover via Stephanie McMahon that Kane, his former tag partner would challenge him for his newly won title. The Demon was hell-bent on dethroning the new champion, but the fire that fueled Kane couldn’t extinguish Bryan’s never-say-die attitude. Bryan persevered over his hellish adversary in an Extreme Rules Match, but more bad news was around the corner.

Bryan was forced to undergo neck surgery, and unable to compete, Stephanie McMahon insisted that he surrender the WWE World Heavyweight Championship. When Bryan refused, Stephanie allowed him to change his decision at Payback, and if he did not surrender the title, she will fire his wife, Brie. Before he could announce his decision, the “Total Divas” star quit WWE and sent a thunderous slap across Stephanie’s face.

Unfortunately, as revealed by renowned surgeon Dr. Joseph Maroon, Bryan would be unable to compete at Money in the Bank 2014, prompting Stephanie to vacate the WWE World Heavyweight Championship. WWE’s “Yes!” Man continues to recuperate from surgery, waiting for the moment to step back into contention for the WWE World Heavyweight Title he never lost. During his hiatus, Bryan has been penning his first book, “Yes!: My Improbable Journey to the Main Event of WrestleMania,” as he revealed at San Diego Comic-Con 2014.

As he’s always proven. no matter his rival, any question that asks if Daniel Bryan has what it takes to be a champion in WWE has been answered with a loud, defiant “YES!”

Daniel Bryan will be appearing Saturday. He will be located at Booth # C10.