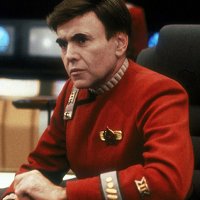 Walter Koenig is an actor, writer, teacher and director, best known for his roles as Pavel Chekov in Star Trek and Alfred Bester in Babylon 5.

Koenig made guest appearances on such television series as Medical Center, The Virginian, and Ironside. He also had a supporting role in the Emmy Award-nominated TV movie Goodbye, Raggedy Ann. In 1973, Koenig appeared in the film Nightmare Honeymoon. That same year, he played the alien Oro in two episodes of Harlan Ellison's science fiction series The Starlost.

Koenig wrote an episode of the fantasy series Land of the Lost entitled "The Stranger," which aired in 1974. Also in 1974, Koenig appeared in the unsold TV pilot movie The Questor Tapes, written by Gene Roddenberry and Gene L. Coon. In 1976, Koenig reunited with TOS co-star William Shatner in the Columbo movie "Fade in to Murder”. In 1982, Koenig appeared on the short-lived adventure series Bring 'Em Back Alive. In 1983, Koenig played the role of Pompey in a TV movie adaptation of William Shakepeare's Antony and Cleopatra.

Koenig starred in the 1989 independent science fiction/action film Moontrap, in which he played Col. Jason Grant, an astronaut who takes on sentient machines from the moon that have been programmed to conquer Earth. Koenig appeared in another science fiction film in 1989 called Deadly Weapon.

Besides his work on Star Trek, Koenig is also well known for his role as villainous Psi Cop Alfred Bester on the acclaimed science fiction series, Babylon 5.

Koenig had a supporting role in the 1996 martial arts film Sworn to Justice, and starred in the 1997 independent film Drawing Down the Moon. In 1998, Koenig made a gag appearance on an episode of Diagnosis Murder which involved a possible alien abduction. The episode also featured his TOS co-stars Majel Barrett, George Takei, and Grace Lee Whitney, Star Trek: The Next Generation's Wil Wheaton, and Lost in Space and Babylon 5 star Bill Mumy.

Koenig made an appearance in the independent science fiction movie/pilot, The Privateers, in which he acted alongside Karl Urban. Koenig later made a guest appearance as a Russian submarine commander on the comedy series Son of the Beach.

Koenig and his Star Trek castmates voiced caricatures of themselves in the 2002 episode of Futurama entitled "Where No Fan Has Gone Before". This episode parodied many aspects of Star Trek, and thus contained numerous Star Trek-related references, gags, and in-jokes. Some of the references related to Koenig included his delivery of "nuclear wessels" in Star Trek IV and his having to share scripts with George Takei on the set of Star Trek.

Other recent acting credits from Koenig include a supporting role in the 2006 film Mad Cowgirl and an appearance in the 2007 TV movie Bone Eater. In 2006, he published his first novel, Buck Alice And the Actor-robot, in which survivors of an alien invasion vie for the hand of the last fertile woman on Earth.

In 2013, Koenig ventured into the steampunk genre, starring in the short film Cowboys & Engines alongside Malcolm McDowell and Richard Hatch. He also played an evil newspaper tycoon in Blue Dream from director Gregory Hatanaka.

Walter Koenig will be appearing Friday, Saturday, and Sunday. He will be signing autographs and taking part in professional photo ops all weekend long.There is a fee of $40 per Autograph, $40 for Professional Photo Ops (8×10 glossy photos printed on site), and $20 for table side informal photos / selfies (with your own camera). He will be taking part in Q&A’s and Panels that are open to all attendees. PRE-ORDER your Walter Koenig Photo Ops at https://register.growtix.com/e/florida_supercon_2015/479