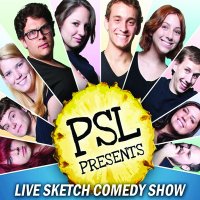 As Wilmington’s longest-running sketch comedy and shadow cast troupe, Pineapple-Shaped Lamps has been performing live on stages all over the East Coast since 2010. When shouting at the screen isn’t enough, they get inside the box with their YouTube channel and appearances on the CW Network.

Named for a reference to their original inspiration, the Rocky Horror Picture Show, this group performs sketch comedy, improv, and shadowcasts of some of their favorite movies and TV shows. From RHPS to Buffy the Vampire Slayer, Cannibal: the Musical, and Dr. Horrible’s Sing-Along Blog, they’ve gathered a loyal following of fans who might stick up for them when they get shoved in a locker.

Their first original stage show, “A Pineapple-Shaped Show,” won a Wilmington Theater Award for Best Original Production in 2012, which shows they do, in fact, have some class. They followed that up with a performance of the cult classic “SEX (a.k.a. Wieners & Boobs)” in 2014, so…there goes that.