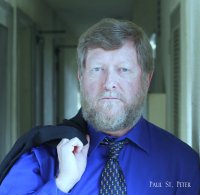 A versatile performer, Paul also sang for four seasons with the San Diego Opera Company, three seasons with The San Diego Civic Light Opera, and appeared in several productions at the Old Globe Theatre. In Los Angeles, Paul has acted on the stage at The Globe Playhouse, Richard Basehart Theatre, Palos Verdes Shakespeare on the Meadow, and has “gone on the road” with Nevada Shakespeare in the Park for eleven seasons.

As an instructor, he has taught speech, accents, dialects, phonetics, vocal production, and Shakespeare at The American Academy of Dramatic Arts, California State University Los Angeles, San Diego State University, Los Angeles Broadcasting School, The Windward School, and is a speech and acting coach for Native Voices at The Autry, a Native American theatre company, and The Rogue Artists, a hyper-Theatre Company.