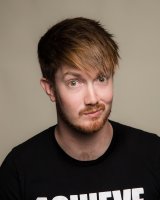 Chad James is an American YouTube personality, voice actor and producer for Rooster Teeth's ScrewAttack channel. Most known as the voice of Boomstick in the DEATH BATTLE series, he also hosts Rooster Teeth's RWBY recap show RWBY Rewind and is a reoccurring personality and host on various other Rooster Teeth shows. He likes video games, puppies and long walks on the beach.

No charge for autographs, videos, etc., but we ask you to restrict your requests for autographs to 2 or 3 and keep your time with him brief in fairness to others.