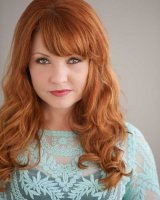 Most recently she can be heard as Midori from Space Patrol Luluco, Green Guts from O.K. K.O! Let’s be Heroes, and Yukana from My First Girlfriend is a Gal. And yes, Jamie will soon be reprising her role of Rias Gremory in season 4 of High School DxD.