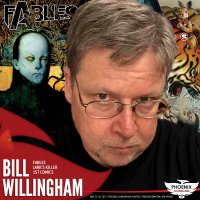 Bill Willingham is the New York Times bestselling writer and creator of the long-running Fables comic series, along with writing many other comic books and prose novels, some of which have been published and some of which will be published.
Bill has just announced LARK’S KILLER, his first original fantasy series since he created Fables in 2002, which became one of the best-loved (and best-selling) comics series of all time over its more than 14 year run. LARK’S KILLER, for all ages (with parental guidance, of course), will begin publishing monthly from 1First Comics starting this August with a 33 story page first issue, but Bill and editor Megan Sloane will be bringing to Phoenix Comicon a Convention special Exclusive advance of LARK’S KILLER first issue.