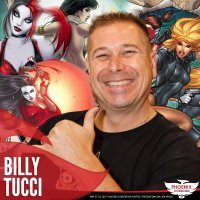 Billy Tucci is an award-winning cartoonist best known for his modern-day samurai fable, “Shi”. Through Billy’s Crusade Fine Arts, the multi-Eisner Award-nominated Shi has been printed in five languages sold more than 3 million comic books. He is also known for DC Comics’ “Sgt. Rock”, “Harley Quinn”, “Flash Vs. Superman” and “Batman.”
His earnest retelling of the Christmas story, “A Child Is Born” has quietly turned into an international blockbuster after winning the Christian Small Publisher Book of the Year Award.
2017 sees the release of the all-new “Shi – Hotaru” graphic novel, along with two new creator-owned projects, “Zombie-Sama!” and “Company Z”.
He’s honored to be a guest at this year’s PCC and will be signing books, lithographs, and drawing commissions all weekend.