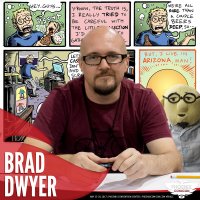 After discovering punk rock in his teenage years, Brad Dwyer played in a variety of loud, obnoxious bands before eventually applying the same D.I.Y energy and aesthetic to self-publishing autobiographical mini-comics (in addition to occasional stories of fiction).
His weekly, music-themed comic strip, “Record Heat”, ran for over a year in the Phoenix New Times paper, archives of which can be found online. He has also contributed to a variety of comic anthologies, including “Unite and Take Over, Vol. 2: A Smiths Comic Anthology”, and the first two volumes of Mitch Clem’s award winning “As You Were”, a punk rock-themed comics compilation. Additionally, he has had comics published by Razorcake fanzine, and is involved with designing art for bands, music events, and ‘zines. Brad’s art and comics can currently be viewed online in the award winning web-comic, “Epic Tales of the Mundane”, as well as on various social media platforms.