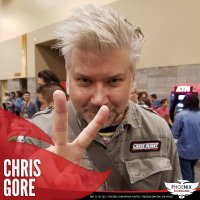 Chris Gore is a comedian and writer who was a regular on G4TVs Attack of the Show. He is the founder of Film Threat, the author of several movie books, writer/producer of the feature comedy My Big Fat Independent Movie and his podcast is PodCRASH with That Chris Gore.

Chris currently co-hosts Geektime with Ralph Cirella on SiriusXM Howard 101. There he provides news and commentary from the world of geekdom.

Chris latest project is a comedy album/book titled “Celebrities Poop.”
Get more at ChrisGore.com or follow Chris @ThatChrisGore on Twitter.