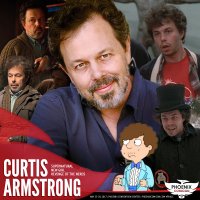 His first role came in the 1983 hit film Risky Business. However, he is probably best known for his role of Booger in Revenge of the Nerds and its sequel Revenge of the Nerds II: Nerds in Paradise. He later reprised his role as Booger in the 1992 television movie Revenge of the Nerds III: The Next Generation and the 1994 television movie Revenge of the Nerds IV: Nerds in Love. His other films include: Better Off Dead, Big Bully, One Crazy Summer, Bad Medicine, National Lampoon’s Van Wilder, Smokin’ Aces, DodgeBall: A True Underdog Story, Jingle All The Way, Southland Tales, and Beer for My Horses. He also had a recurring role as Herbert Viola on the television series Moonlighting, and played the part of Ahmet Ertegün in the biographical film Ray (2004).
He voices “Snot” on the animated sitcom American Dad!, parodying his role from Revenge of the Nerds. Curtis has made several guest appearances on popular TV shows such as: Grey’s Anatomy, That 70’s Show, Boston Legal, My Name is Earl, The Game, Rules of Engagement and New Girl.
Curtis and former Revenge of the Nerds co-star Robert Carradine host the TBS reality TV competition series King of the Nerds. The series, which pits contestants with expertise in a variety of geek interests to see who will be crowned with the eponymous title, premiered in January 2013.
Curtis continues to play the angel Metatron in several episodes in the 9th, 10th and 11th seasons of Supernatural.