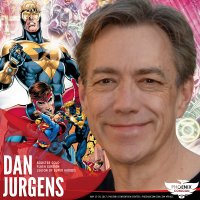 Dan Jurgens began his career a number of years ago as artist on DC Comics’ THE WARLORD. He then created, wrote and drew BOOSTER GOLD and added FLASH GORDON, LEGION OF SUPER-HEROES, GREEN ARROW and JUSTICE LEAGUE AMERICA to his résumé. Most notably, he enjoyed a long run as writer/artist on SUPERMAN, including the best-selling DEATH OF SUPERMAN for which he won the National Cartoonists Society Award. Jurgens followed up with the mega-hit crossover ZERO HOUR, which redefined the DC Universe.
At Marvel Comics, he wrote and/or drew THE SENSATIONAL SPIDER-MAN, THE MIGHTY THOR and CAPTAIN AMERICA.
Jurgens then returned to DC Comics to write and/or draw GREEN ARROW, JUSTICE LEAGUE INTERNATIONAL and FIRESTORM. He then revived and redefined Superman in the SUPERMAN: LOIS AND CLARK series, positioning the character to move forward as part of DC’s Rebirth effort, while also creating Superman’s son, Jonathan Kent. Dan is currently writing ACTION COMICS and BATMAN BEYOND for DC and will also be drawing an issue of the KAMANDI CHALLENGE.