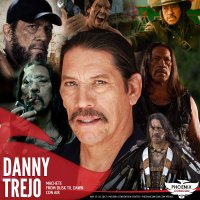 One of the most prolific actors working today, Danny Trejo’s break into the world of Hollywood came while working as a youth drug counselor. A teenage patient asked for his assistance dealing with cocaine problems on the set of Runaway Train (1985). While there, Trejo was offered a job as an extra in the film's prison scenes. Edward Bunker, himself a former convict and well-respected crime author who was writing the screenplay for the film, recognized Trejo, with whom he had done time at San Quentin. Bunker, remembering Trejo's boxing skills, offered him $320 per day to train Eric Roberts, one of the movie's stars, for a boxing scene. Director Andrei Konchalovsky liked Trejo's work and decided to offer him a small role in the film as a boxer. It has been widely misreported that Trejo was actually serving time in the prison during filming, when in fact he had been released over a decade earlier.
From there, Trejo began appearing in regularly in films throughout the 80’s and 90’s, mostly in villainous or anti-hero type roles in films and television shows such as “Death Wish 4,” (1987) “Maniac Cop 2,” (1990) “Baywatch,” (1991) “Jake and the Fatman,” (1992) “Mi vida loca” (1993) and “Blood In, Blood Out” (1993).
In 1995, Trejo appeared in Robert Rodriguez’s “Desperado,” beginning a working relationship that continues to this day. Trejo subsequently appeared in Rodriguez’s films “From Dusk Till Dawn,” (1996) “Spy Kids,” (2001) “Once Upon a Time in Mexico,” (2003) “Planet Terror” (2007) which eventually led to a spin off starring role in the film “Machete” (2010) and its sequel “Machete Kills” (2013).
Never one to slow down, Trejo has numerous projects in the works including upcoming appearances in the films “Frat Pack,” “Dark Games” and “Death Race: Anarchy,” and many more due for release throughout 2017 and 2018.