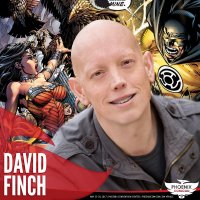 For almost 20 years David Finch has inspired fans with his raw and gritty art aesthetic. His comic credentials include creator-owned successes Ascension and Aphrodite IX and mainstream hits like Ultimate X-men, New Avengers, Moon Knight and Ultimatum. In addition to comics, Dave has done work for film, video games and the music industry. Moving to DC Comics in 2010, Dave’s used his powerful and emotional artwork to tackle Gotham’s grittiest hero in Batman: Dark Knight. His work with Geoff Johns on Justice League of America and Forever Evil brought a fresh and exciting perspective to the DC universe of villains. November of 2014 saw another chapter begin in the career of this artistic phenom when he began working on one of comics’ most iconic characters: Wonder Woman.
These days Finch’s breathtaking eye for detail can be found bringing the caped crusader to life in the pages of Batman with comic writer Tom King.