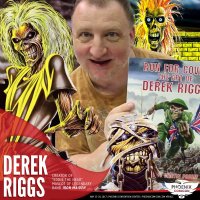 Born in Portsmouth, England and growing up in Coventry, Derek Riggs is a self-taught artist in traditional painting as well as digital. As an independent illustrator, Riggs worked to bring a new style to the world of rock music that resulted in one of his most popular characters, Eddie the Head. This original character was later used as the mascot by the iconic band Iron Maiden and first appeared on their debut album, Iron Maiden, released in 1980.

Riggs continued to create a series of album covers for the band throughout the 80s and 90s, all of which became the most popular album covers of all time. His work on the covers have earned awards internationally and have also outsold all other form of merchandise, including Disney’s Mickey Mouse.
In 2006, Derek Riggs came to America where he currently lives in California. After having a book of his work published by a fan, he began to sell posters and prints of his works, including his various Eddie the Head illustrations. His book and work can be viewed and purchased on his website at derekriggs.com