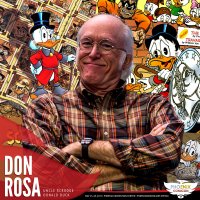 Well known in American comics fandom since the 1960’s for his vast comic book collection and fanzine writing & cartooning, Rosa became internationally famous starting in 1987 when he began writing and drawing “Uncle $crooge” and “Donald Duck” comics for various licensed publishers in Europe. Just as they once were in America, Donald Duck comics (based on Carl Barks’ work) continue to be the best-selling comic books in Europe and South America where the *weekly* Duck comics have been read by hundreds of millions of fans for over 60 years. This makes Rosa one of the world’s best known and most popular cartoonists, but still very easy to visit with at American shows where he can relax in “relative obscurity”. American comics fans are mostly familiar with his most famous and oft-reprinted work, the Eisner Award-winning “Life and Times of $crooge McDuck” series.
See http://en.wikipedia.org/wiki/Don_Rosa for more.