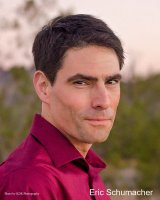 Eric Schumacher is an acclaimed Actor/Director with a rapidly growing fan base and a steadily growing list of successful film, local and national television, and multimedia projects under his belt.

Eric is best known for his work as an actor. Notable projects include his roles as lawman Wyatt Earp in Fox Tv’s Legends and Lies: the Real West, and Doc Holliday the upcoming feature film Tombstone Rashomon directed by the legendary Alex Cox (Repo Man. Sid and Nancy, Walker) the ground breaking Web series Zhon: The Alien Interviews and Crewing Up and the geek culture trilogy Writing Fren-Zee, (currently in preproduction for film #2 Revenge of Zoe) among many others.

As a director, Eric has put most of his attention towards multimedia and series projects such as the upcoming sci fi series My Stolen Time Machine and on music videos such as the award winning post-apocalyptic film/music video They Pretend.

Eric serves as the Creative Director for multiple award winning multimedia production company Seelie Studios, (www.seeliestudios.com) which, among many other acclaimed projects produced the 13 season branded web series, The Bob and Angus Show for Mayfair Games under the leadership of fellow producer/director Don Dehm.

Eric has been a featured guest on various local and national talk shows, has been quoted in many prestigious publications regarding the film and multimedia industry, lectures frequently at sci-fi conventions, comi-cons and film festivals and is an expert in entertainment marketing.