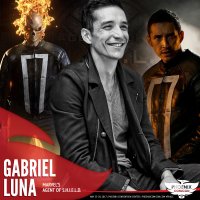 Gabriel Luna is an American actor. Luna made his screen acting debut as Kristofer Rostropovich in the drama film Fall to Grace, which premiered at South by Southwest on March 12, 2005. Since then, he has been seen in numerous TV shows and movies. Subsequent roles include starring as Nate Hitchins, in the drama film Dance with the One, a supporting role in the black comedy film Bernie, Vinnie in the sports comedy Balls Out, Tony Bravo on the El Rey Network television series Matador, Miguel Gilb on True Detective, Lance Flores in Transpecos, and as motorcycle racer Eddie Hasha in the Discovery Channel miniseries Harley and the Davidsons.

Luna is also a founding member of the Austin-based Paper Chairs Theatre Company. On stage in Austin, Luna has portrayed Sergei Maxudov in Black Snow, the title character in Orestes, and Clov in Endgame. He received the Austin Critics Table Best Lead Actor Award in 2010 for all three performances.

Most recently, Gabriel Luna has joined the cast of Agents of S.H.I.E.L.D. as Robbie Reyes / Ghost Rider.