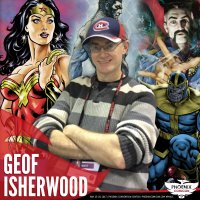 Renowned Doctor Strange and Suicide Squad artist, as well as artist for DC, Broadway, and Heroes Of The North, in fact, creator of Psylocke’s Katana! Some of Geof’s major title runs include “Dr. Strange,” “Suicide Squad,” “Conan the Barbarian,” “Conan The King,” “Namor” and “The ‘Nam”. Geof is also the inker of the graphic novel, “Revenge of the Living Monolith,” over Marc Silvestri. But he says the comic brought to him most often to sign is probably “Dr. Strange” #50.
Geof has also worked on over 60 film and TV productions, including X-Men: DOFP and X-Men: Age of Apocalypse, Being Human (US), Hot Wheels, Helix, Wings of the Dragon, The Phantom, The Last Templar, Race to Mars, The Covenant, Dead of Night, Battlefield Earth, Gothika, Rollerball,The Fountain and much, much more.
In addition to film work, as an expert in figure drawing, Geof teaches in the Concept Art and Illustration program at Algonquin College in Ottawa, Ontario, as well as having a sketch list that is in demand at every show he attends.
Geof is now also working for Renegade Media drawing the final issue of the soon-to-be-released “Necromatics”.