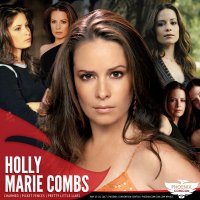 Holly Marie Combs is an American actress and TV producer who began her acting career in print ads and commercials at age 7. Holly’s first leading role was that of Kimberly in Picket Fences, for which she won a Young Actor’s award. Holly went on to rid the world of evil in the acclaimed TV show, WB’s Charmed, playing Piper Halliwell alongside Shannen Doherty.
Holly made a cameo appearance in Ocean’s Eleven and starred in the romantic comedy See Jane Date. She has also starred in several made for TV movies and television series, independent films, and feature films. Holly was an original cast member and is a continuing guest star on Pretty Little Liars, playing Ella Montgomery.