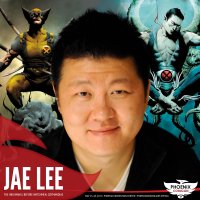 Jae Lee is a Korean-American comic book artist, known for his dark and elegant style. In 1990, he became one of the youngest artists ever to work for a major publisher. He is an Eisner Award-winner for his work on Marvel’s The Inhumans.
The art from his collaboration with writer Grant Morrison on Fantastic Four: 1234, was featured in an exhibition at The Society of Illustrators in New York City. In 2007, Lee was hand picked by Stephen King for a six-year collaboration on the Dark Tower comics and novels.
Lee’s recent projects include Before Watchmen: Ozymandias and Batman/Superman.
To arrange preshow commissions, visit jaeleeart.com. You can also follow Jae on Instagram.