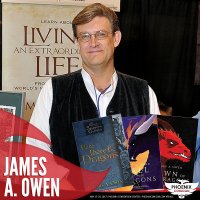 James A. Owen is the author of the bestselling “Chronicles of the Imaginarium Geographica” series (“Here, There Be Dragons”), the creator of the critically acclaimed “StarChild” graphic novel series, and the author of the “MythWorld” series of novels, the author and illustrator of the forthcoming series “Fool’s Hollow,” and the author of the non-fiction trilogy called “The Meditations” (“Drawing out the Dragons”). He is also the founder and executive director of Coppervale International, a creative think tank and studio that also publishes magazines and books, and develops and produces television and film projects. He is developing “Here, There Be Dragons” and the other “Imaginarium Geographica” books for film and television with Rick Porras, Associate Producer of “The Lord of the Rings.” His newest books are the paperback edition of “The First Dragon,” and the limited-edition hardcover omnibus, “The Twentieth-Anniversary Nearly-Complete Essential StarChild.” He makes his home in Arizona, where he is currently redesigning an entire town. Visit him at heretherebedragons.net and at jamesaowen.com.