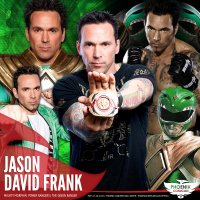 Jason David Frank is well-known for his role of Tommy Oliver in the long-running children’s television show Power Rangers. His character has morphed into the most different power rangers in the show’s twenty-year history. He first morphed on the scene as the Mighty Morphin Green Ranger, a bad boy turned good, who after only ten episodes was intended to be written out of the show. However, due to his popularity, Jason David Frank’s character was able to morph into the Mighty Morphin White Ranger, Red Zeo, Red Turbo and then returned in 2004 as the Black DinoThunder Ranger.
Throughout Power Ranger history, Jason David Frank’s character has appeared in 225 total episodes and counting, more episodes than any other ranger. He also starred in the series both full-length movies, “Mighty Morphin Power Rangers The Movie” (1995) and “Turbo: A Power Rangers Movie” (1997). In 2013, Jason David Frank reprised his role of the Green Ranger in the Power Ranger’s 20th Anniversary season, which features a mega war that features many rangers from the show’s history. With his dynamic screen presence and outstanding martial arts, he has catapulted Tommy to legendary fame in the Power Ranger fandom and to this day maintains a fan base that stretches around the world.
His martial arts is not an act, Jason Frank, an inductee of the World Karate Union Hall of Fame, is a highly accomplished and respected martial artist with 37 years experience. In 1994, he created his own martial arts system, “Toso Kune Do,” which means “Way of the Fighting Fist” and incorporates many different aspects of martial arts. Jason David Frank currently holds a seventh-degree black belt in American Karate, a purple belt in Brazilian Jiu-Jitsu, and in February 2013, he received the title of Master of Muay Thai by the world-renowned Muay Thai trainer Grand Master Toddy (Arjan). He is the owner and operator of Rising Sun Karate and MMA, with three schools in Texas and one in California.
Actor and martial artists are not his only roles, Jason David Frank is also an entrepreneur, MMA fighter, and world record holder. He is the founder and CEO of Jesus Didn’t Tap, the first Christian-based line of MMA Clothing and fight gear. It was one of the first apparel company to recognize and celebrate the faith and commitment of MMA fighters. Since its inception, Jesus Didn’t Tap has broaden its name in the MMA world and has been the sponsor to many MMA fighters. In January 2013, Jason David Frank became the Guinness World Record Holder for most 1-inch pine board broken during freefall. He was introduced to skydiving during Power Rangers and shattered the previous record with seven broken pine boards.
With his recent achievements in 2013, Jason Frank has begun to document his momentous endeavors in a reality series, “My Morphing Life.” The first season episodes include his world record achievement, receiving his prestigious Arjarn title in Muay Thai, his return to Power Rangers as the Legendary Power Ranger, his notable convention touring, and more. The reality show’s first season can be viewed via Bat in The Sun’s Youtube Channel and currently has more than three million views. Season one through three of My Morphing Life can be viewed on the new ConTV channel, a Netflix of sorts for people who enjoy pop culture. Due to the shows high demand, Jason will be bringing season 4 back to Youtube.
This is not the first time Jason David Frank works with Bat in the Sun on November 2013, the two worked on the White Ranger vs. Scorpion Super Power Beat Down, a show that pins super hero against super hero. The highly popular episode has been viewed over five million times and goes down in the show’s history as the most voted battle. Recently in May 2015, Bat in the Sun and Jason David Frank released another hit video, Green Ranger vs. Ryu.
With so many successful collaborations, Jason David Frank and Bat in the Sun are working together on an action-packed web series, which he will star in as the hero and a secret action-packed project that will debut in 2017, name Taz Kayden: Operation Black Unicorn. Recently on October 2016 at New York Comic Con, Bat in the Sun and Valiant Entertainment announced that Jason David Frank will portray superhero Bloodshot, a former soldier with powers of regeneration and meta-morphing made possible through nanites injected into his blood. The series, Ninjak vs. The Valiant Universe, will be the first series for Valiant Entertainment’s Valiant Digital division.
He currently has more than 800,000 Facebook followers and counting and with more than thirty million people viewing his page per week. His Instagram currently has over 300,000 fans and reaches millions weekly. Jason Frank’s constant interaction with his fans, free giveaways, contests, and more have made him excel above the rest as the Floyd Mayweather of social media.
This popularity has also opened other ventures, like a possible involvement in the Power Rangers reboot movies, produced by Saban Entertainment and Lionsgate Films. Lionsgate Films is responsible for extremely successful movies such as the Twilight Saga, The Hunger Games, Dogma, American Psycho and Fahrenheit 9/11.
Always someone of great passion and determination, it is safe to say that we can expect much more from Jason Frank in the years to come.