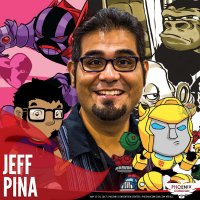 Jeff Pina is a Phoenix comic creator that started with “Dr. Oblivion’s Guide to Teenage Dating” over 10 years ago and has expanded his self-publishing line to include “Imaginatives”, “SuperPawn”, “Bosco & Fleet: Detectives of the Occult Sciences”, “Monkey In Space” and “Nicholas Claus: Warrior Saint”. He’s also self-published art books like “Cats Are Bad At…” and autobiographical stories about him, his wife Tricia, their newly adopted daughter, Ella, and their cats (Simba & Tembo) in “I Frickin’ Love You”.
He’s done work for Hasbro Games, Valiant Comics, Big Dog Ink, Moonstone Publishing along with local anthologies such as “Pirate (heart) Ninja” (which he co-created) and “The Smiths: Unite & Take Over”. He’s also known for his “chibi” style of art, as he tries to make things as adorable as possible.
A nerd to the core, he loves sci-fi (Star Trek, in particular), comics, art and anything that tells a good story. You can find his work on Facebook under “Jeff Pina Writes and Draws Stuff”, and on Instagram as @JeffPinaMakesComics.