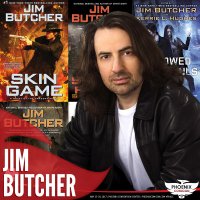 Jim Butcher is the author of the Dresden Files, the Codex Alera, and a new steampunk series, the Cinder Spires. His resume includes a laundry list of skills which were useful a couple of centuries ago, and he plays guitar quite badly. An avid gamer, he plays tabletop games in varying systems, a variety of video games on PC and console, and LARPs whenever he can make time for it. Jim currently resides mostly inside his own head, but his head can generally be found in his home town of Independence, Missouri.

Jim goes by the moniker Longshot in a number of online locales. He came by this name in the early 1990’s when he decided he would become a published author. Usually only 3 in 1000 who make such an attempt actually manage to become published; of those, only 1 in 10 make enough money to call it a living. The sale of a second series was the breakthrough that let him beat the long odds against attaining a career as a novelist.