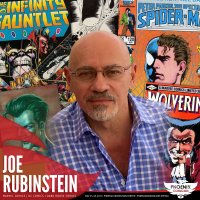 Josef “Joe” Rubinstein started his artist career in the early 1970s as a teenager. Primarily working as an inker, his artwork has been published by every major U.S. comics publisher including Marvel Comics, DC Comics and Dark Horse Comics. One of his most important works has been inking The Official Handbook of the Marvel Universe over a span of twenty years for which he holds a Guinness World Record of inking more pencilers than any other inker. Among his extensive inking credits (which include more than 2,500 comic books), were work with Michael Golden on Micronauts, Jim Starlin’s Warlock, Frank Miller’s original Wolverine mini-series that was the bases for the last WOLVERINE movie and Aquaman with Don Newton. Later assignments included a mini-series for Dark Horse Comics called Archenemies, and co-inked issues of DC Comics’s Ion mini-series. 2017 marks the 25th anniversary of The Infinity Gauntlet, on which Joe performed inking duties and which is the basis for the next Avengers film. He currently inks projects for DC Comics, Marvel Comics and Kingstone Publishing.