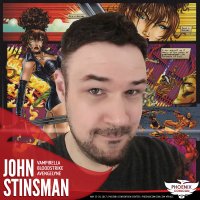 John Stinsman has been working in comics and animation for over 20 years. He began his career as the artist of Vampirella, then moving over to Image Comics working on Bloodstrike and Team Youngblood before starting his three-year run as the artist for Avengelyne. He then followed that up as the regular artist on Lady Pendragon” and the writer/artist on his own creator-owned series Scarlet Crush.
In recent years, John illustrated the independent comic Stormbringers and has been a cover artist for Notti and Nyce as well as creating the comic art that appears in Busta Rhymes and Mariah Carey’s new music video “Where I Belong“. Currently, John works full time as a freelance illustrator and character designer and is working on his return to comics writing and drawing the creator-owned comic series Dream Girl.