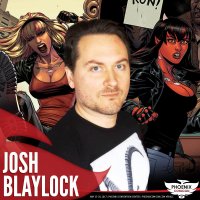 Josh Blaylock returns to Phoenix Comicon this year on the CON DOMINATION TOUR 2017. Josh is a comic book writer, artist, and publisher based in Chicago, IL, and the founder and head of Devil’s Due Entertainment. He maintains his creative roots writing the supernatural, punk rock action series, Mercy Sparx and the upcoming Igloo BBQ webcomic about a penguin struggling to make it in the comic industry and the big city.
He’s famous for disrupting the industry over a decade ago by creating the ’80s retro boom in comics, through a deal with Image Comics, and later as an independent publisher, bringing titles like G.I. Joe, Micronauts, and Voltron back from obscurity. His stories and characters have seen translation into film, animation, and toys across the world.