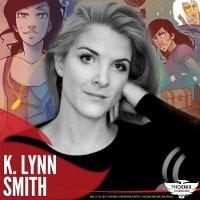 K Lynn Smith is an artist and writer from the Mid-Michigan area. She found her start in the comic book world as a cartoonist for her university newspaper. In 2006, her artwork won the Michigan Press Award, as well as the Helen Victoria Haynes World Peace Cartoon Contest.
She is currently working on the western webcomic Plume, published by Devil’s Due Entertainment, and has been involved with projects such as Garfield, Cards Against Humanity and the SIN Studios’s video game, TUEBOR.