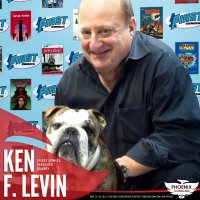 Ken F. Levin makes the deals for a select handful of comics superstars (like Mike Mignola, Bill Willingham, Max Allan Collins, and Garth Ennis) and helps produce their projects (he’s Executive Producer on QUARRY and Executive Producer on the coming series THE BOYS (both for HBO/Cinemax), among others). He co-founded and is the President and Executive Editor of the iconic comics and graphic novel publisher 1First Comics. In his last case before retiring as a national civil trial lawyer he was lead counsel for Neil Gaiman in Gaiman’s suit against Todd McFarlane and, in oral argument before the Seventh Circuit Court of Appeals, Ken successfully defended all elements of Mr. Gaiman’s federal jury verdict, a decision which established the controlling precedents for comics creators’ copyright interests. And he negotiated and or set up, among other projects, the feature films ROAD TO PERDITION, WANTED, HELLBOY, THE SCRIBBLER (which he produced), and, on television, SABLE, PAINKILLER JANE, and – pulling off the impossible – PREACHER (on AMC Network), on which he’s also an Executive Producer.