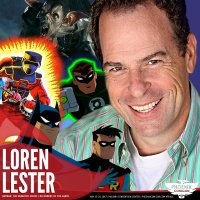 Loren Lester is a highly successful voice-over artist best known as the quintessential voice of “Robin” and “Nightwing” on Batman: The Animated Series and The Adventures of Batman and Robin. Other iconic roles include “Barbecue” on G.I. Joe and “Rick Gordon” in Defenders of the Earth. He has recurred on The Avengers: Earth’s Mightiest Heroes (as the first actor to ever voice the character “The Iron Fist”) and as “Hal Jordan, The Green Lantern” on Batman: The Brave and the Bold. Most recently he took on the role of villain as “Dr. Kirk Langstrom” AKA “Man Bat” in Arkham Knight.
A native of Los Angeles, began his career as a teenager and has amassed over 35 years of film, stage, and television credits. In his early years he played the evil hall monitor “Fritz Hansel” in the cult classic film Rock ‘N’ Roll High School, “Charlie Boy” in the horror cult film Evilspeak, and he recurred for 5 seasons as “Roy” on The Facts of Life opposite Nancy McKeon.
Since then, he has appeared in over 200 episodes including Parenthood, Bones, NCIS, Ringer, Good Luck Charlie, Curb Your Enthusiasm, Awake, The Closer, Desperate Housewives, Cold Case, Criminal Minds, Castle, Two and a Half Men, and many others. He recurred on all three seasons of the HBO hit comedy series Hung, and had recurring roles on Victorious (Nickelodeon), Gilmore Girls, General Hospital, The Bold & The Beautiful and The Young and the Restless. He starred in the season finale of Final Witness on ABC, a docudrama anthology series in which he played real-life killer “Hans Reiser.”
In 2016, Loren starred in the film A Week in London (which had its premiere at the Cinerama Dome in Hollywood) and wrapped the feature Tragedy Girls. Loren has become a familiar face in the indie film scene, having had major roles in The Interrogation, A Family of Clowns, A Leading Man and Max. Other favorite film roles include the Wes Craven suspense thriller Red Eye, and Midnight Clear (multiple film festival winner.)
His voice has been heard in hundreds of TV and radio commercials and in numerous critically-acclaimed audio books and in popular interactive games such as Halo 4.
Phoenix Comicon and his official convention representation, CelebWorx, present Loren Lester to his first Arizona convention appearance.