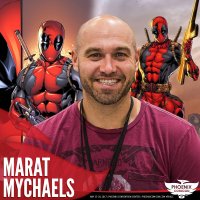 MARAT MYCHAELS has had a long and successful career in the comic book industry as a creator. He started out as Image Comics first rookie working on the highly successful Extreme Studios series Brigade. During his career Marat has worked on numerous titles for most major publishers including Marvel Comics on projects such as Deadpool Corps and X-Force: Shatterstar, at DC Comics his work includes Hawk and Dove and Grifter, he has also worked for the fore mentioned Image Comics and IDW, Zenescope, Avatar Press and First Comics to name a few. Marat currently resides in Phoenix, AZ and is working on various Extreme Studios relaunch books for Image Comics to celebrate the 25 year anniversary as well as producing his own line of parody books: Do You Pooh?, Walking Deadpooh and Hardlee Thinn.