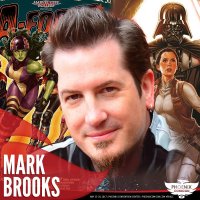 Mark Brooks is an illustrator and designer known most recently for his acclaimed interior work on Marvel Comics’ Han Solo series and cover art on a variety of titles including Deadpool, Star Wars, and Ant-Man. Mark will be announcing exciting new work with both Marvel and just recently produced his first covers for DC Comics for Justice League of America vs Suicide Squad.
Previously, Mark completed a popular run as cover artist for Deadpool and Fearless Defenders as well as a successful arc on the popular series X-Men Legacy. Past interior work includes Wolverine and the X-Men: Alpha & Omega miniseries, the critically acclaimed Uncanny X-Force, Thor, and Avengers and X-Men: Consequences.bSideshow Collectibles produced a signature series of premium format comiquette statues based on his designs including Scarlet Witch and Psylocke. Mark has been featured on Amazing Spider-man, Ultimate X-Men, Young Avengers and many more. His work can also be found on various other projects for video games and toy packaging for such companies as Hasbro, Lucasfilm, Disney, Capcom and Sega on properties including Transformers, Robotech, and Street Fighter.
For more information on Mark’s work, please follow him on
Facebook https://www.facebook.com/MarkBrooksart
Instagram https://www.facebook.com/MarkBrooksart
Twitter @MarkBrooksArt, and on Tumblr https://www.facebook.com/MarkBrooksart .