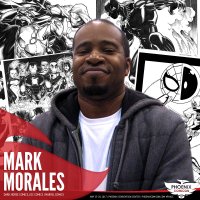 A longtime comics pro, Mark has worked for many companies including Image, Dark Horse, Chaos and DC Comics, mostly as an inker. For the last 15 years he has worked at Marvel Comics on numerous titles including X-men, Daredevil, Thor, Secret Invasion, Siege andNew Avengers. His most recent projects are Avengers vs X-men andAvengers: Children’s Crusade.